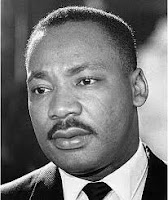 1. In nineteen sixty-three, the black citizens of Birmingham refused to buy goods from the stores in the city. They demanded more jobs for blacks. And they demanded to send their children to white schools.
2. The white citizens were angry and afraid, but they refused to meet the blacks' demands. The situation became tense. Many protestors were beaten and arrested. Even Doctor King was arrested. But he was not in prison for long.
3. The Birmingham demonstrations made international news. Whites soon saw that it was easier to meet the demands of the protestors than to fight them. Martin Luther King and his followers had won an important victory in Birmingham. It marked a turning point for the civil rights movement.
4. Martin Luther King recognized the importance of Birmingham. It did not mean that racial separation had ended.  Some still remains today. But he felt that the battle was almost won. And he wanted to call on the nation for itssupport. So doctor king organized a March on Washington, D. C.
5. The March on Washington took place in August, nineteen sixty-three. About two hundred fifty thousand persons gathered there. They came to demand more jobs and freedom for black Americans. There were to be many other marches in Washington during the nineteen sixties and early seventies. But this was the biggest up to that time.
6. It was in Washington that Martin Luther King gave one of his most famous speeches. The speech is known as the "I Have a Dream Speech. " It expressed his ideas for the future. Doctor king said:: “So, even though we facedifficulties of today and tomorrow, I still have a dream. It’s a dream deeply rooted in the american dream.’
7. “I have a dream, that one day, this nation will rise up, live up the true meaning of its creed. We hold these truths to be self evident, that all men are created equal. This is our hope, this is a faith that I go back to the south with. With this faith, we will be able to work together, to pray together, to struggle together, to go to jail together, to stand up for freedom together, knowing that we will be free one day”
8..”When we allow freedom ring, when we let it ring from every village and every hamlet, from every state and every city, we will be able to speed up that day when all of God's children will be able to join hands and sing in the words of the old Negro spiritual: Free at last! Free at last!  Thank God Almighty, we are free at last!”
9. Martin Luther King received the Nobel Peace Prize in nineteen sixty-four. But he did not live to see the final results of his life's work. He was shot to death in Memphis, Tennessee, in nineteen sixty-eight.

10. Doctor King always felt he would die a violent death. His life had been threatened wherever he went. And he often spoke to his wife about his fears. But he never believed that his life was more important than the civil rights movement. The night before he died he spoke to his supporters.

11. He said: “We've got some difficult days ahead. But it really doesn't matter with me now, Because I've been to the mountaintop. Like anybody, I would like to live, But I'm not concerned about that now, I just want to do God's will. And He's allowed me to go up to the mountain. And I've looked over.”

12. “And I've seen the promised land. I may not get there with you. But I want you to know tonight, that we, as a people will get to the promised land. And I'm happy, tonight. I'm not worried about anything. I'm not fearing any man. Mine eyes have seen the glory of the coming of the Lord.
Músic: “We shall overcome”

You have been listening to the story of civil rights leader Martin Luther King, Junior. This Special English program was written by William Rodgers. Your narrators were Shep O'Neal and Warren Scheer. I'm Doug Johnson. Listen again next week at this time for another People in America program on the Voice of America.