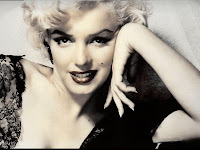 1. I'm Shirley Griffith. And I'm Steve Ember with the VOA Special English program PEOPLE IN AMERICA. Today we tell about movie star Marilyn Monroe. She died many years ago, yetstill is one of the best known American women.

2. Her name at birth was Norma Jean Baker. Her life as a child was like a bad dream. She lived with a number of different people, and often was mistreated.

3. At age sixteen Norma Jean married a sailor. But she soon ended that marriage. She changed her hair color from brown to shining gold. And she changed her name to Marilyn Monroe.

4. She wanted to be an actress. And she succeeded. She appeared in a number of Hollywood movies. Millions of people went to see them. By the time Norma Jean had reached the age of twenty-six, her beautiful face and body earned her a place as one of America's leading movie stars.

5. But success and fame were not enough to make her happy. The troubles of her childhood days stayed with her. She drank too much alcohol. She took too many drugs.

6. At the age of thirty-six, she took her own life. She has been dead since nineteen sixty-two. Still, her fame continues to grow. People born long after she died are watching her movies on television. Objects that belonged to her bring huge prices at public sales.

7. People continue to talk about what they feel is her strange death. Some people believe she was murdered. Two investigations showed that she died as the result of too many drugs.

8. Why is the public still so interested in a woman who died so many years ago? A number of reasons. Her exciting but tragic life. Her connections with well-known people. And her image as an especially desirable woman.

9. In the nineteen fifties, many Americans believed sex was a very private subject. People often severely judged those who were sexually appealing.

10. Into this atmosphere burst Marilyn Monroe. As one critic said, her body was round in all the right places. She wore her clothes like skin. When she walked, she moved her lower body in a way that few other actresses had done. Her voice was soft and breathy. She soon became America's golden girl.

11. The story of Marilyn Monroe begins on June first, nineteen twenty-six. Norma Jean was born that day in the West Coast city of Los Angeles, California. Her birthplace was not far from the Hollywood movie studios where she would someday be a star.

12. Her mother, Gladys Baker, suffered from mental problems. Often the mother had to be treated in a hospital for long periods of time. Her daughter was sent to live with a number of different people.

13. The actress later would describe her stays with these foster families as sometimes very unhappy. During the worst experiences, she would go to a movie theater. There the young Norma Jean escaped into the make-believe world of movies.

14. By the time she was seventeen, Marilyn was trying very hard to be a movie actress. She finally was able to get an actors' agent to help her. He got Twentieth Century Fox Company to give Marilyn parts in some movies it produced.

15. Marilyn may have worked more to improve her appearance than to improve her performance in acting classes. Some people at Twentieth Century Fox said she did not like to work at all. She appeared in only one movie. And she had only one line to speak in that. The Fox movie company dismissed her.

16. Soon, however, her agent got her a job at Columbia Pictures. She appeared in a movie called "Ladies of the Chorus." She sang two songs. Several critics praised her performance. But Columbia dismissed her.