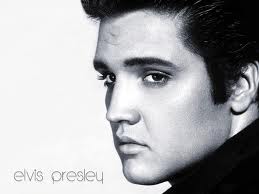 1. Welcome to PEOPLE IN AMERICA, a program in VOA Special English. Today Rich Kleinfeldt and Steve Ember tell about one of America’s most popular singers, Elvis Presley.

2. That song, “Hound Dog” was one of Elvis Presley’s most popular records.  It sold five million copies in nineteen fifty-six.  Music industry experts say more than one thousand million of Elvis’s recordings have sold throughout the world.  He was a success in many different kinds of music -- popular, country, religious, and rhythm and blues.

3. Elvis Presley won many awards from nations all over the world, yet he did not record in any language other than English.  He never performed outside the United States, except for three shows in Canada.  Yet, his recordings and films have been, and are still, enjoyed by people all over the world.

4. Elvis Aaron Presley was born in the southern town of Tupelo, Mississippi on January eighth, nineteen thirty-five.  His family was extremely poor.  During his childhood, he sang in church with his parents.

5. He also listened to music that influenced his later singing, including country, rhythm and blues, and religious music.  Elvis and his family moved to Memphis, Tennessee when he was thirteen.

6. After high school, he had several jobs, including driving a truck.  In nineteen fifty-three, he made his first recording of this song, “My Happiness”:

7. Elvis Presley recorded the song at the Memphis Recording Service.  The story is that he paid four dollars to make a recording for his mother.  A woman who worked at the public recording studio had another job with a local independent record company called Sun Records.  She made a second recording of Elvis’s songs because she thought the owner of Sun Records should hear him sing.

8. The owner of Sun Records, Sam Phillips, had been looking for a white performer who could sing black rhythm and blues.  He suggested Elvis work with a guitar player and a bass player.  Several months later Mister Phillipsagreed to have the group make a record.  It was released on July nineteenth, nineteen fifty-four.  One of the songs was “That’s All Right”:

9. The record sold well in Memphis, and was played a lot on local radio stations.  To let others hear Elvis, Sam Phillips organized a series of performances at country fairs in the area.

10. One of the people who heard Elvis perform at these shows was Colonel Tom Parker.  Elvis signed an agreement that Colonel Parker would organize his appearances.

11. One of Elvis’ first new recordings became a huge hit, and led to his many appearances on television.  It was “Heartbreak Hotel”:

12. By the middle of the nineteen fifties, Elvis Presley was known around the world as the young man who moved his hips in a sexual way as he sang rock and roll music.  Many adults said he and his music were bad influences on young people.  Young women loved him.  Huge crowds attended his performances.

13. He made his first movie in nineteen fifty-six.  It was  “Love Me Tender.” The title song was a big hit.